RMILTER IS OBSOLETED SINCE RSPAMD 1.6

From Rspamd 1.6, this project is obsoleted by milter protocol implementation in rspamd proxy. You should NOT use it in any new projects, there will be completely no updates (including bugfixes) and the compatibility with Rmilter is guaranteed merely unless Rspamd 1.7 release! Please switch to Rspamd proxy.

Historically, Rmilter supported many other features besides Rspamd integration. So far, all these features are implemented in Rspamd which allows to simplify integration with different MTA (e.g. Exim, Haraka or other non-milter compatible servers). Therefore, if you use this functionality you should consider switching it to Rspamd where all equal features are usually better implemented and have active and actual support.

All duplicating features are still kept in Rmilter for compatibility reasons. However, no further development or bug fixes will likely be done for them.

These options are in their default enabled states merely for compatibility purposes. In future Rmilter releases, they will be DISABLED by default.

Here is a scheme that demonstrates Rspamd and Postfix MTA integration using Rmilter: 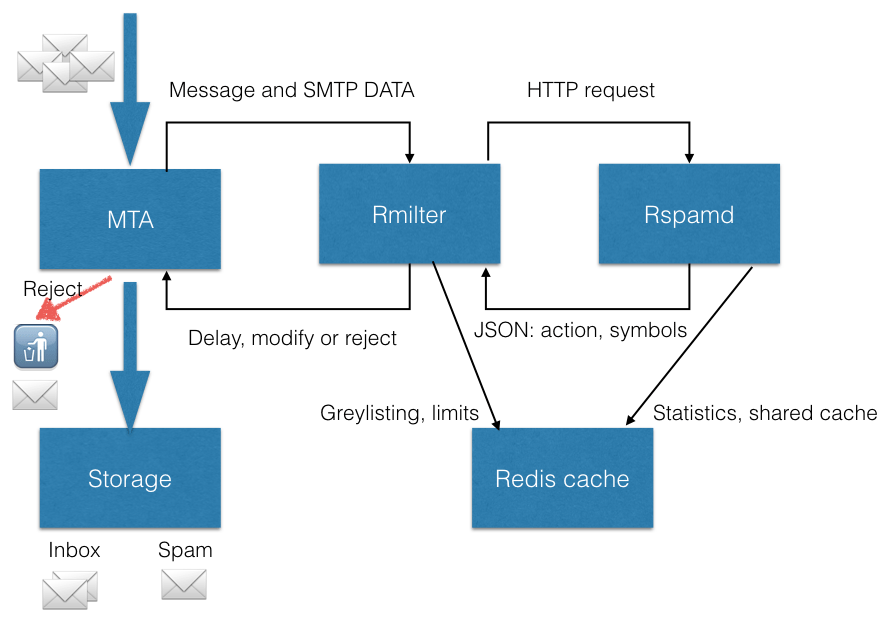 There are several useful settings for Postfix to work with this milter:

This section contains a number of useful configuration recipes and best practices for Rmilter.

Since version 1.9, Rmilter supports macros .try_include that can be used to conditionally include some user specific file. There is also globbing support in all include macros, so you can use * or ? in your patterns. By default, Rmilter tries to include /etc/rmilter.conf.local and then all files that match the pattern /etc/rmilter.conf.d/*.conf (there could be a different prefix for your system). The settings are natively overridden by files inside files included. Hence, settings that are defined later will override settings that are defined earlier:

will produce the following configuration:

It is also possible to add elements to lists (from Rmilter 1.9.2) using += operator:

will produce the following configuration:

Using of empty lists can remove the default lists content: