Statistics is used by Rspamd to define the class of message: either spam or ham. The overall algorithm is based on Bayesian theorem that defines probabilities combination. In general, it defines the probability of that a message belongs to the specified class (namely, spam or ham) base on the following factors:

However, Rspamd uses more advanced techniques to combine probabilities, such as sparsed bigramms (OSB) and inverse chi-square distribution. The key idea of OSB algorithm is to use not merely single words as tokens but combinations of words weighted by theirs positions. This schema is displayed in the following picture: 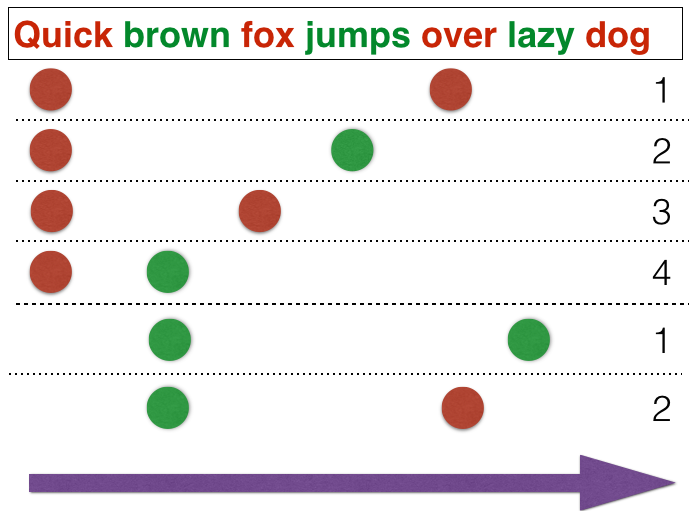 The main disadvantage is the amount of tokens which is multiplied by size of window. In Rspamd, we use a window of 5 tokens that means that the number of tokens is around 5 times larger than the amount of words.

Statistical tokens are stored in statfiles which, in turn, are mapped to specific backends. This architecture is displayed in the following image: 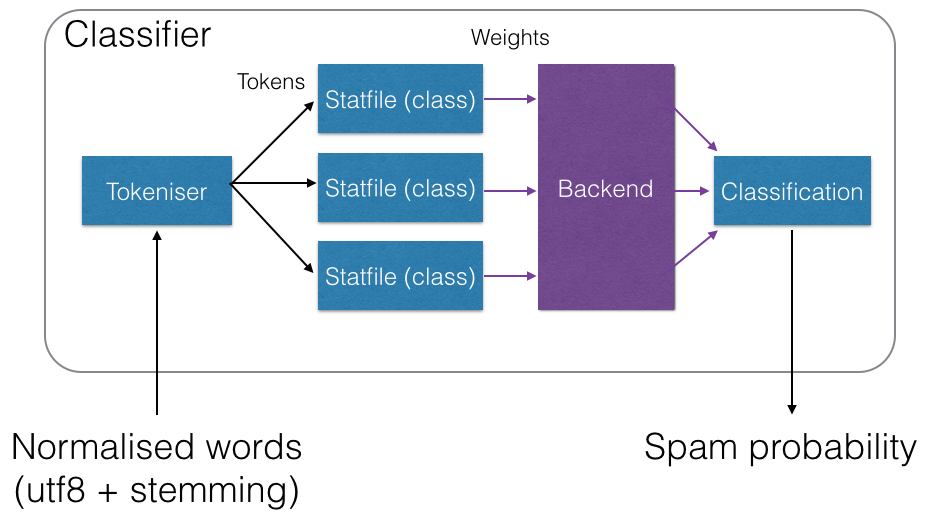 It is also possible to organize per-user statistics, however, you should ensure that Rspamd is called at the finally delivery stage (e.g. LDA mode) to avoid multi-recipients messages. In case of a multi-recipient message, Rspamd would just use the first recipient for user-based statistics which might be inappropriate for your configuration (Rspamd prefers SMTP recipients over MIME ones and prioritize the special LDA header called Delivered-To that can be appended by -d options for rspamc). To enable per-user statistics, just add users_enabled = true property to the classifier configuration.

The classifier will only learn headers that are defined in classify_headers in the options.inc file. It is therefore not necessary to remove any headers added (such as X-Spam or others) before learning, as these headers will not be used for classification. Rspamd also uses Subject that is tokenized according to the rules above and several meta-tokens, such as size or number of attachments that are extracted from the messages.

Supported parameters for the redis backend are:

You are also recommended to use bayes_expiry module to maintain your statistics database.

From version 1.1, Rspamd supports autolearning for statfiles. Autolearning is applied after all rules are processed (including statistics) if and only if the same symbol has not been inserted. E.g. a message won’t be learned as spam if BAYES_SPAM is already in the results of checking.

There are 3 possibilities to specify autolearning:

Redis backend is highly recommended for autolearning purposes since it’s the only backend with high concurrency level when multiple writers are properly synchronized.